If you are a fan of the arcade version, you may be puzzled that there are only four truckers. Nothing in the manual mentions that Nippon Maru is locked away until you complete the game once with each trucker available. I can only imagine Sega was trying to extend the replayability of the title. However, another aspect missing from the game is the internet mode. True, the internet mode in the Japanese release of 18 Wheeler is simply a ranking website where players can post their results and see how they compare with others (like the Shenmue website). Perhaps Sega didn’t feel they could justify the expense of a dedicated server to what was an already financially shaky year for them. However, one can’t help but wonder what ever happened to the rumored online head-to-head action that was supposed to be included with the game. When you take into consideration that there are only four levels, this game ends up feeling short on value. Unless you really enjoy the style of gameplay, then it’s a blast. Too bad attention wasn’t given to the soundtrack. It wasn’t very inspired. When listening to Jet Grind Radio, Shenmue, or even the pruned soundtrack of Crazy Taxi compared to the one in 18 Wheeler, the soundtrack was clearly low on the priorities of AM2. The player listens to a trucker radio station as he careens down the highway. The music isn’t very memorable, something the designers may have realized because it is played so softly in the background. However, the sound effects are right on. Oncoming traffic beeps at you, the truck squeaks, groans, and hisses as you’d expect, riding through a gas station sounds like you are riding through a gas station (not that I have experience with such things, ahem). The sound effects help add a convincing realism to the game.

Sales be damned, though! The Dreamcast, as I said earlier, was way ahead of its time and was an extremely powerful machine. Its lean towards Sega exclusive properties, flawless arcade ports, and Japanese game studios made for a really unique, well-developed library and set of physical accessories.

The game took me two hours to complete the first time and, now that I’ve mastered it, only about 30 minutes to finish each time I sit down to play it.. For some, that will be far too short to justify $40 and even the Parking minigame doesn’t really count as added value. However, the Score Attack mode and Versus mode add major value. Both modes operate nearly identically, with the main difference being that in Score Attack you get to whack, smack, and attack Lizardtail, and in Versus mode you get to abuse your friends. If Lizardtail made you see red in the Arcade mode, you’ll love dropping your payload in his path for bonus dollars. Damage him enough and not only will his semi start looking sorry, but you can even destroy his rig and remove him from the course. But it’s Versus mode that helps the home version of 18 Wheeler be worth owning. Dropping cars on friends was never so much fun. Choose from four different payloads to place in the path of your loved ones. Don’t feel guilty, they’ll be dropping boxes all over you too. In fact, there’s even a crane for some serious hurting, but it’s difficult to control. You’ll need to practice with it a bit before you can use it to actually hit anybody.

In the end, what really kills 18 Wheeler is the lack of gameplay length. Once you learn where and when to slipstream behind certain trucks and what branching paths to take, there's really no point in playing the game anymore. 18 Wheeler American Pro Trucker is a blast while it lasts, but when you're done, you won't find much more fun. 10-4 that, good buddy.

Reality takes a back seat to fun and physics, but the gaming experience is entertaining. If you are familiar with the arcade version, you already know how to play this game. The port is near perfect. 18 Wheeler American Pro Trucker is done by the same people who brought the world Shenmue and Virtua Fighter, Sega's AM2.

Brainsoftware has created this game. They are also known for many other car games on our platform such as the Parking Fury Series. There’s not much to say about the sound quality other than it’s fairly unexciting. The CB chatter sounds like an actual CB radio picking up static with the voice but often it’s hard to understand what is being said. The music played is appropriate as its mostly country based which may be annoying to some but you don’t notice it for the most part. Other than that, most of the other sounds at least aren’t distracting but there isn’t much value added either.

The basic premise is simple — just select one of the over-the-top characters with a matching rig and take off down the highway to make your delivery time. You can shave time off through shortcuts, but be careful of your driving; damage to your cargo reduces your score. Not all the ‘shortcuts’ will save you time though, but since the courses are fairly short it doesn’t take long to learn which forks you want to take. You’re supposed to be running cargo cross country from New York to San Francisco by way of Florida. With such a long haul you’d expect plenty of room and time to maneuver, but each stage is surprisingly short. Despite the fact that the map distance you cover varies, each stage feels like it’s exactly the same, short distance.

So put on your stylish trucker hat, call in for your buddies on the radio and listen to some soothing sounds as you drive down the highways with these 18 wheeler games. Stay on the lane, and you should be fine. Don’t forget all these games are free, and can be played without downloads or registration. Choose between awesome games like Evo-F2, City Car Driving, Truck Simulator and many more. Much fun!.

Haul cargo cross-country in the PlayStation 2 conversion of Sega's driving game. 18 Wheeler (also known as semi-trailer truck) is the name given to specific trucks that can pull large trailers behind them, usually stuffed with cargo ranging from barrels full of food, to oversized consumer goods or even heavy machine parts that need to reach a specific factory. Anything that needs to travel a long way by road, but is too big or due to its numbers to unwieldy to transport by car, can safely travel in an 18 Wheeler. Their drivers are so ubiquitous that their style of dress, CB radio and character type have long since become a recognisable archetype in American culture. These games let you slip behind the wheel of a large automobile (and you may find yourself in a beautiful house, too).

Another way to prevent getting this page in the future is to use Privacy Pass. You may need to download version 2.0 now from the Chrome Web Store. Drive big rigs on the Dreamcast with 18 Wheeler: American Pro Trucker. With crisp graphics, massive levels, and mammoth trucks, American Pro Trucker hopes to follow on the success of.

Scania Truck Driving Simulator has been released on Mac App Store today, finally Apple Mac players have a chance to play the game. 18 Wheels of Steel: American Long Haul Review. This installment of the 18 Wheels of Steel (18 WOS) series puts you back behind the wheel of an enormous 18 wheel semi. Sur cette page tu vas jouer au jeu Camion.

Please stand by, while we are checking your browser. The first thing you learn is that, as fun as it is, you don’t want to hit other cars — that only slows you down. And when running over sedans is unavoidable, learn to place your rig behind another rig in front of you. You can ride the slipstream into greater speeds, often zooming well past Lizardtail (until the computer magically places him ahead of you). Learning to slipstream is crucial to completing the game. It also adds some serious speed to the game, which makes those boring stretches across the Arizona desert almost thrilling. Slipstreaming is most fun in the final level as you cruise at illegal speeds down San Francisco streets to the Golden Gate bridge. The most disappointing thing in 18 Wheeler is the graphics. They’re just awful — nowhere near the quality the PS2 is capable of. Pixelated and choppy, they’re low enough quality that I stuck the disk in my old PlayStation just to make sure it wasn’t a PSX game mislabeled as PS2. Sadly it wasn’t, but even for PSX the graphics don’t measure up. On the other hand, the audio is nicely done, matching up to the quality of the arcade version of the game. What really makes the low quality graphics disappointing is that the Dreamcast version of the game released last year matched the arcade for quality.

If you can judge a game by how aware you are of time, an hour after starting I was deeply immersed into the need to haul my payload to Dallas. The game was challenging but not frustrating. Good controls will make that possible. Unfortunately, Lizardtail, the rival, was a creep — AM2 did a good job with him. You will really hate this guy after a while. Sometimes the computer cheated pretty badly to get ole Lizardtail ahead of me or on top of me. He could be pretty abusive at times, not only driving me off the road or into obstacles, but also he had the annoying habit of parking his rig across both lanes right in front of me. I must admit it seemed unfair at times, but soon I learned how to avoid his nastier driving habits. Best PS1 Games Of All Time: 20 PlayStation Classics.

Another downside to the gameplay is the horn feature. The horn, as you may expect, gets traffic out of your way. This works great in the arcade version, but AM2 has slowed traffic response to the horn in the DC version to make the game more difficult. Without the trouble of cars getting in your way, I’m afraid the game would get over way too quickly. In the end, having the horn, even when you can upgrade it to the deep Love Boat bellow, becomes a useless feature unless you like beeping at people half a mile before you think they’re going to get in your way. I must admit, though, that the traffic AI is wonderfully stupid and you can use that to your advantage. The AI is only worried about you running them over. Once you get used to the non-arcade-like horn and the delay, you can sit back and beep innocent travelers into the path of Lizardtail. I used that tactic on many occasions to prevent Lizardtail from crossing the finish line before me. Visually, 18 Wheeler looks very good. Unlike most racing games we've seen from SEGA, 18 Wheeler runs at 30 frames per second. There's nothing wrong with that at all, but with all the great arcade racing games blazing at a solid 60 fps, it's kinda weird to take a step back with 18 Wheeler. Don't get me wrong, the game still looks very good and I didn't notice any real dramatic differences between the DC version and the arcade version. 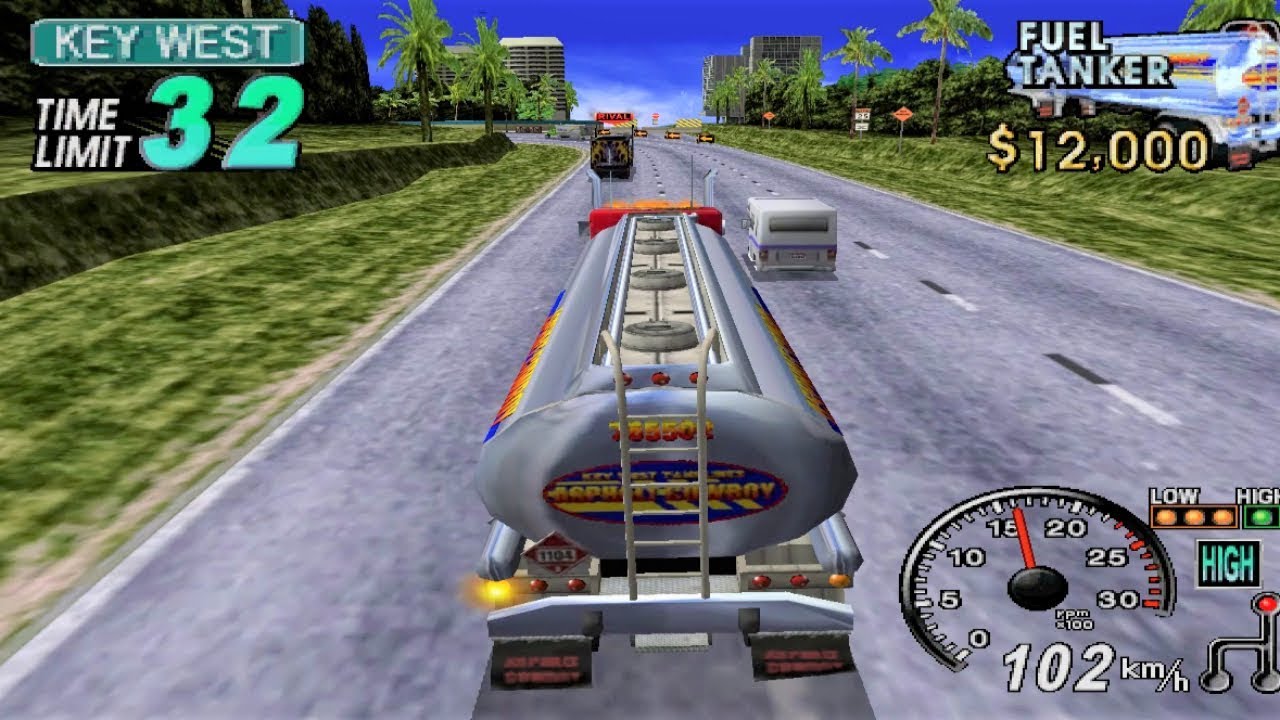 Take a look at some footage of 18 Wheeler: American Pro Trucker from E3 2001. (no sound). Mixed or average reviews- based on 10 Ratings.